“Terrorism through seeds!!!” Astonished by this. Yes, its true fact.

“Terrorism through seeds!!!” Astonished by this. Yes, its true fact. Seed packets delivered to farmer’s house by unknown persons reported at Shirahatti taluk of Gadag district of Karnataka had become a major issue which has spread out in newspapers, twitter and other social media recently.

Farmers are threatened to receive seed packets after this incident. They are extremely panicked whether these seeds are inhabitants of plant viruses or carrier of too many diseases and pests? what is this if they planned to destroy all our agricultural lands if we sow them? what is their actual plan? Its dreadly harmful to our skin on handling them? Farmers are deterred regarding it. Is it being an alert it to any great disaster? Who are they doing this. Does the China reverting back on “India’s stance on BOYCOTT CHINA” in this way?

India is incredible country. It always maintain amicable relationship with its neighbouring countries through negotiating to bring down some mutual agreement or treaties with respect to border issues, water problem or any other issues are being resolved with abiding peace but with the raising conflicts between India and China these doesn’t worked out with ruthless China. So, India lead a big stand point for boycott China products. In this regard central government band list of China apps ruling in India.

Amidst COVID-19, India emerged as largest producer of hydroxychloroquine drug used to treat malaria can also be drug for corona virus but, where are its raw materials were imported from China. In this scenario China took over its hand to rise in prices suddenly which created opportunity for India to increase supply chain management. That is why it is well said that  NECCESSITIES ARE THE MOTHER OF INVENTION. PROBLEMS STRENGTHEN US.

It is accepted fact that we are lagging behind skilled labour, land and infrastructure. Yet we have a lot of untapped potential. We rely on “ATMANIRBHAR BHARAT”. Boycotting China is just like treating cancer. There will be some pain initially. Great history is created after a big disaster only. The country now need to rely on Swadeshi Products in India but made for the world with respect to agriculture and allied products too.

Major exports from India (agri and allied) to china are raw cotton, frozen Shrimps and Prawns, Castor oil, Capsicum, Cuttlefish, black tea, Crabs, groundnut oil accounts to approximately 2000 USD million. but whereas India's top top agroand allied imports accounts to far less than this number. Agriculture being backbone of Indian economy capturing around 15.4 % of annual GDP that is 5306.26 INR billion which emerged as a second largest producer of Agricultural Products. 23% of GDP is from industry. Among that 20% accounts for textile industry it shows the potentiality of the sector (raw cotton) in fact it is a top agri export the China going to round 504.64 USD million. Shrimps and Prawns (frozen) 317 9.41 USD million, Castor oil and its fractions 372.67USD million. In contrast, India imports only 202.51 USD million of agri and allied products. 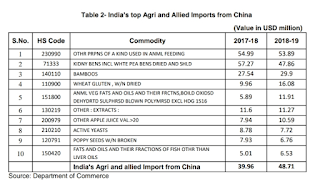 In this view, boycott China products doesn't have much greater impact on agriculture sector instead India has to look for other countries to export raw cotton as it pulls down major country’s income and also nation has great production in aquaculture amidst governmentproviding money incentives to promote this sector. Chinese largely non vegetarians Shrimps and Prawns relishes their tongue them to import these from us. 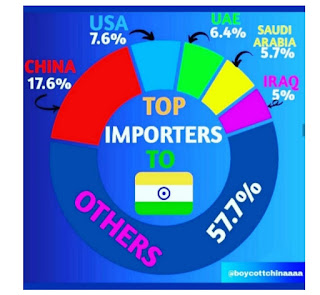 Source – data from International centre for trade and commerce

China is the top importer to India around 17.6%. So what is they start boycott India in return to Boycott China so our country should develop skilled labour effective use of resources smart agriculture tips for smarter benefits and proper channel for agricultural marketing should be mapped well before to prevent irresistible actions.